In this week’s installment, we’re going to be taking a swing back at intelligent lighting by taking a look at an extraordinarily powerful 300,000-lumen xenon fixture made by Syncrolite known as the SXB-7/3. 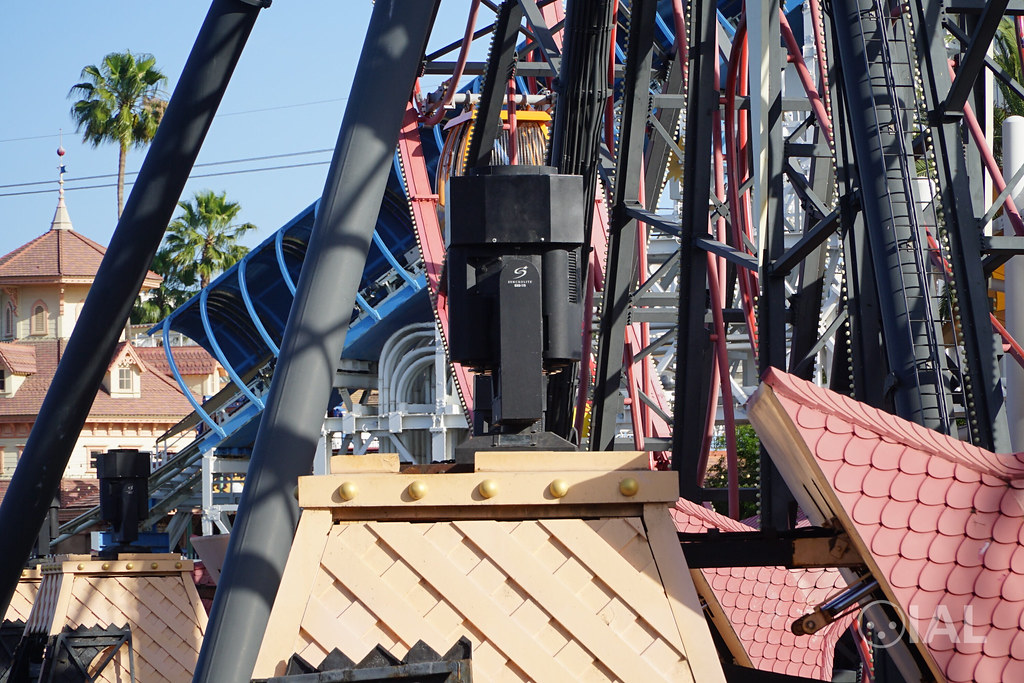 Housed in six huts located across the rear of the lagoon, the Syncrolite SXB-7/3 is used at Disney California Adventure’s World of Color nighttime spectacular to provide backside lighting effects. Like most of World of Color’s equipment, the Syncrolites remain hidden inside a retractable lift underneath faux roofs, only to rise from the enclosures several hours before show time.

During the show, the Syncrolites appear to provide two specific functions: to create a powerful beam of light in varying colors, and to illuminate the show’s fountains from the rear. Effects wise, they’re somewhat like a slower, fatter, but also much brighter version of the Claypaky Sharpy (though the Syncrolite fixture can also produce up to 20° flood alongside a beam). Indeed, compared to the diminutive Sharpy, the Syncrolites are behemoths, weighing in at 205 lbs and featuring a utilitarian aluminum shell that exudes power (and plenty of heat). Long story short, these are very powerful fixtures that seem applicable in large-scale applications where sheer power is key. 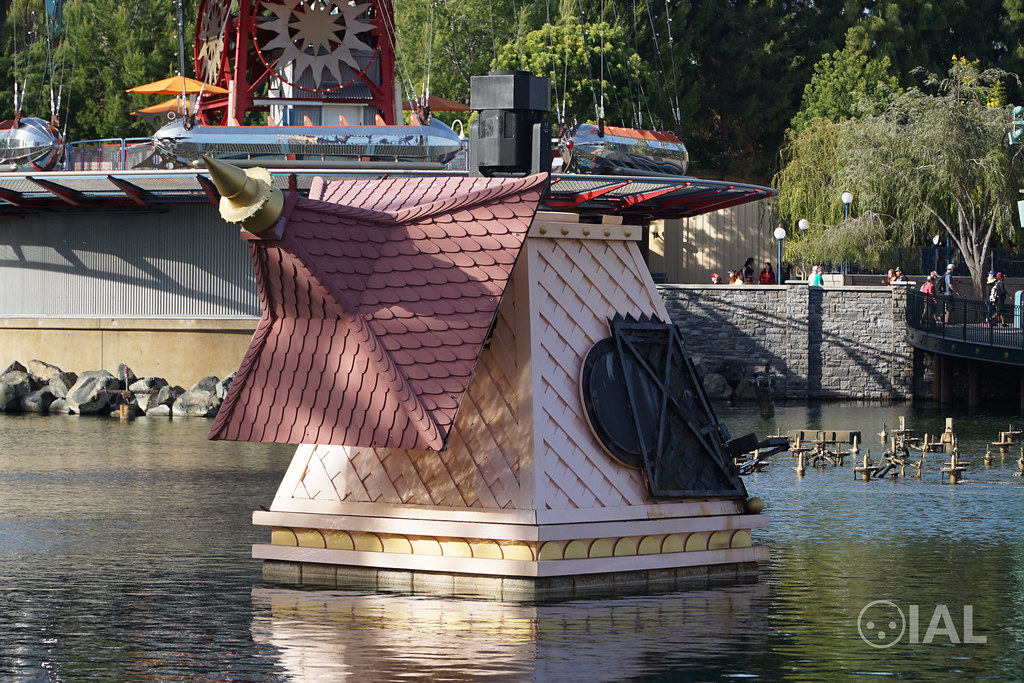 In addition to the fixture’s powerful light, the SXBs also feature gel scrollers as part of Syncrolite’s “DichroFilm OmniColor” color mixing system alongside several gobo effects, making the fixture much more versatile than a traditional Xenon light. World of Color, in particular, uses the Syncrolite scrollers to match or accompany other lighting fixtures used during the show to great effect.

However, unlike World of Color’s other moving heads (which require Tempest environmental enclosures), the Syncrolites operate exposed to the show’s water effects as a result of a weatherproof powder coated aluminum enclosure. However, despite the manufacturer’s claims of weather resistance, the Syncrolites are usually the most common effect that I see out of commission when I watch World of Color. While it appears that most of the fixtures have undergone refurbishment in recent weeks (thereby increasing their reliability), it wasn’t too uncommon to see one or two fixtures out of commission during a show for the last several months. In fact, I’ve even been to a performance that only featured one working Syncrolite fixture out of the available six! Luckily, the tech crew at Disney eventually stowed the remaining Syncrolite SXB-7/3 away, perhaps thinking that one working SXB would do more harm than good.

Syncrolite fixtures were also previously used for World of Color’s side lighting effects, adding powerful beams of light to help compliment the show. Mounted on retractable poles on opposite ends of the lagoon, the Syncrolites were eventually replaced with PRG Best Boy Washes and Claypaky Sharpys after an extended period of downtime – again hinting at SXB’s dislike of water (it wasn’t uncommon for both poles to get doused by a fountain or two). 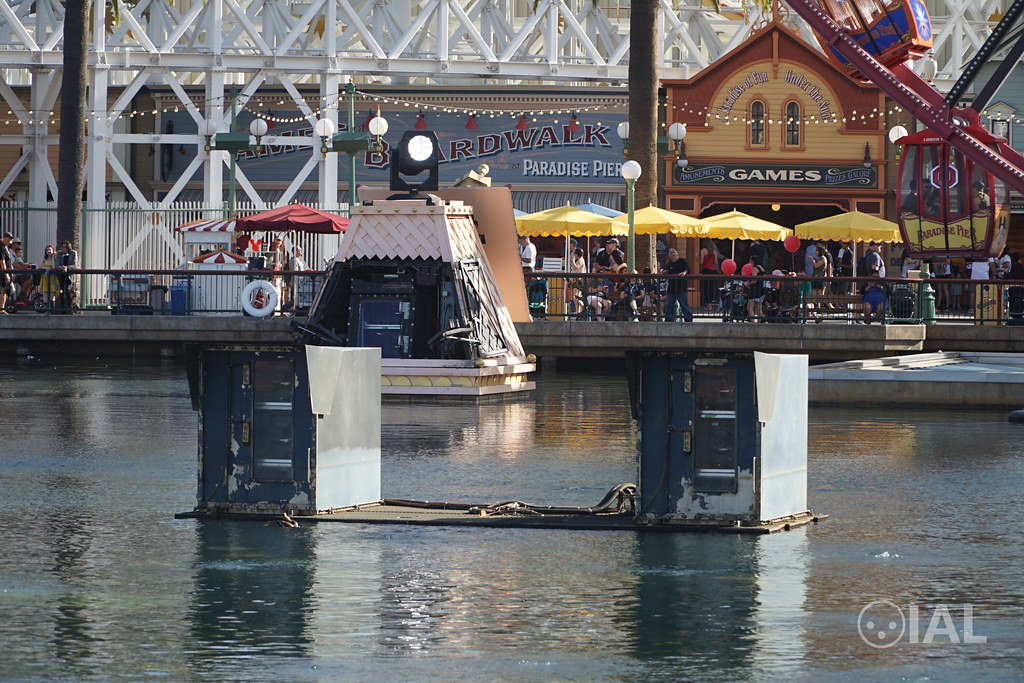 A Syncrolite SXB-7/3 undergoing tests before World of Color 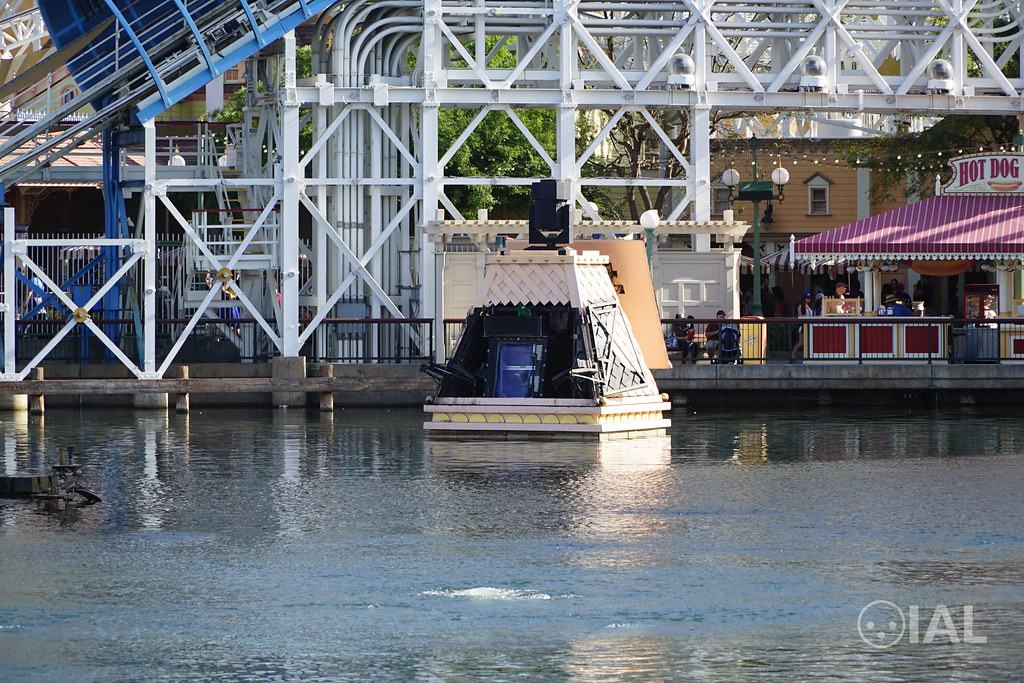 A Syncrolite SXB-7/3 in its upright position

Either way, the Syncrolites do provide a unique element to the show, and I’ve always felt World of Color is a poorer show when the fixtures are not operational. That being said, their somewhat consistent downtime does lead me to think that they’re not the most reliable fixtures when mated with constant water exposure. With the rise of the Claypaky Sharpy and Supersharpy alongside the versatile Claypaky Scenius (all of which were used for the seasonal show, World of Color: Season of Light), I wouldn’t be too surprised to see the Syncrolites replaced with something more durable in the future. Their only saving grace is perhaps the custom made enclosures in which they’re housed, which makes it difficult for Disney to replace them with a Tempest-enclosed Scenius or Best Boy Wash.

Regardless, cheers to the SXB-7/3 and its powerful lighting effects. It’s certainly a unique fixture that adds a unique element to World of Color, and I’m glad Disney continues to employ them during the show.

On a bit of a side note, maybe Syncrolite could get Tempest to make a humongous bubble for the SXBs (heat permitting). Wouldn’t that be funny to see…

Thank you for reading, and be sure to drop a line if you have a correction or any additional information.