Installed in 2013, the Bose RoomMatch system was introduced to WaterWorld as part of Universal’s efforts to prolong the lifespan of the show, and to minimize sound spilling into the surrounding neighborhoods. While the previous system (composed of EAW KF300s and EAW SB250s) carried the show for nearly 18 years, dying processors coupled with noise complaints made it a necessity to replace the old system with something a bit more modern.

Enter the Bose RoomMatch array to save the day. 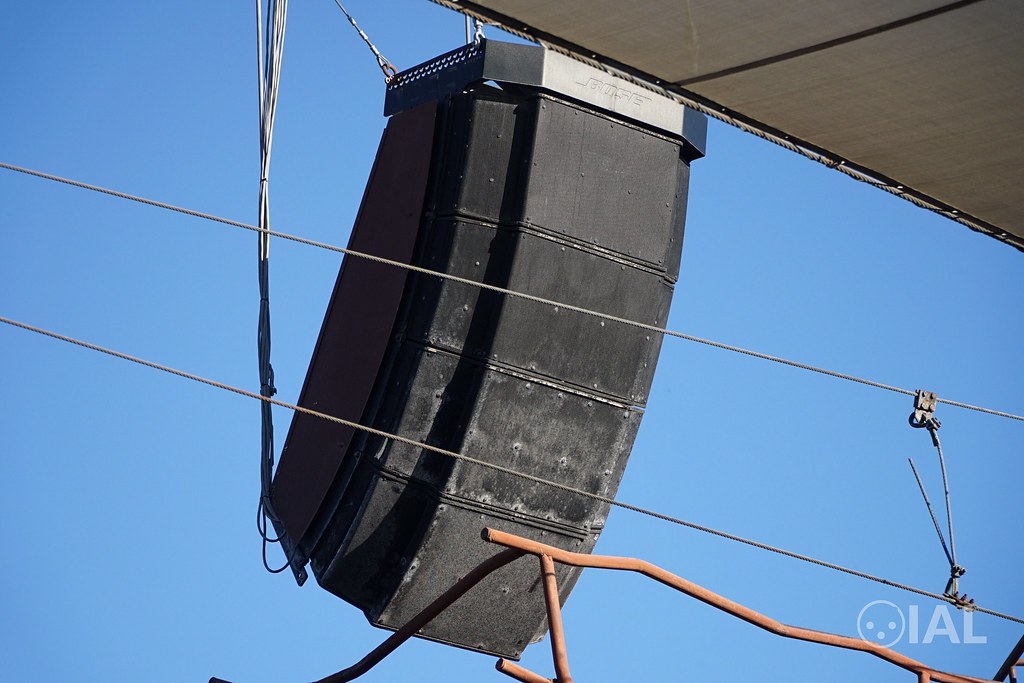 A Bose RoomMatch array composed of four modules. Each module offers a different horn pattern to conform to the space.

Off the bat, let me profess that I’m not the biggest fan of Bose Professional. While they certainly have an interesting catalog that seems to fit certain applications rather well, the bulk of their products – to me at least – simply don’t sound very good. I understand that sound quality isn’t always the biggest consideration when it comes to selecting the right speaker for the job, but my experience with the company – as a listener – hasn’t been very impressive. So color me skeptical when I learned that Universal was replacing their EAW system with one from Bose. 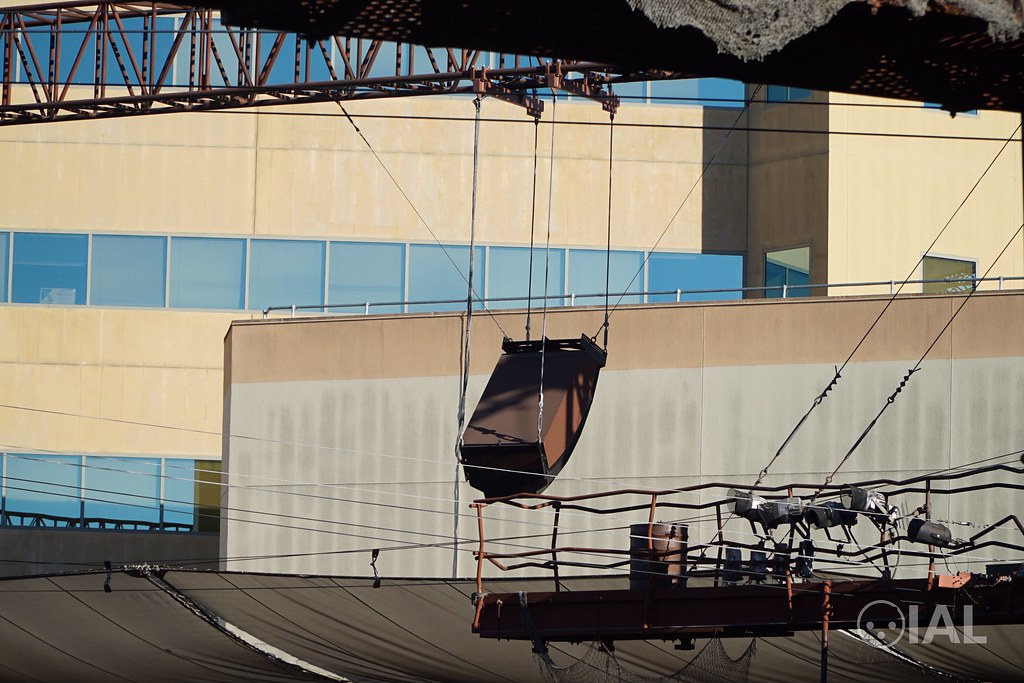 Each Bose RoomMatch array is hung on a truss with four rigging points alongside two stabilizing points to prevent the array from excessively swaying.

When I initially learned that Bose would be the new vendor for the show, my assumption was that each section (there’s a total of three) in the arena would be served by one RoomMatch array, with lower Q modules serving the lower portion of the seating area, and higher Q modules serving the upper tier. For a dual 10″ with six “extended-mid-band compression” drivers, each module is huge, so I incorrectly assumed that Universal wanted to preserve sightlines by hanging a mono array for each section.

Instead, the company decided to maintain the show’s stereo imaging by suspending two arrays of Bose RoomMatch per section from a newly erected truss, with four modules per array. As per Bose RoomMatch guidelines, each module carries a different coverage pattern to ensure that sound is focused at the audience, and away from walls and floors. The effect seems to work rather well, and each of the module’s large size ensures that the array can maintain its directivity at lower frequencies. After all, nothing can replace a large horn, and RoomMatch’s large waveguides ensure that sound is focused where it needs to be.

…and because the Bose RoomMatch system technically isn’t weather resistant, Universal installed extra layers of mesh underneath each grille to protect the drivers from water. Since the drivers are spaced far into the cabinet, I suspect they’re weathering the elements well, though Bose should consider offering a stainless steel grille option to replace the rusting aluminum for installers who elect to use their product outdoors. Some of the RoomMatch arrays aren’t aging well from an aesthetics perspective, and an ultra weather version might be a compelling option to offer in the future. 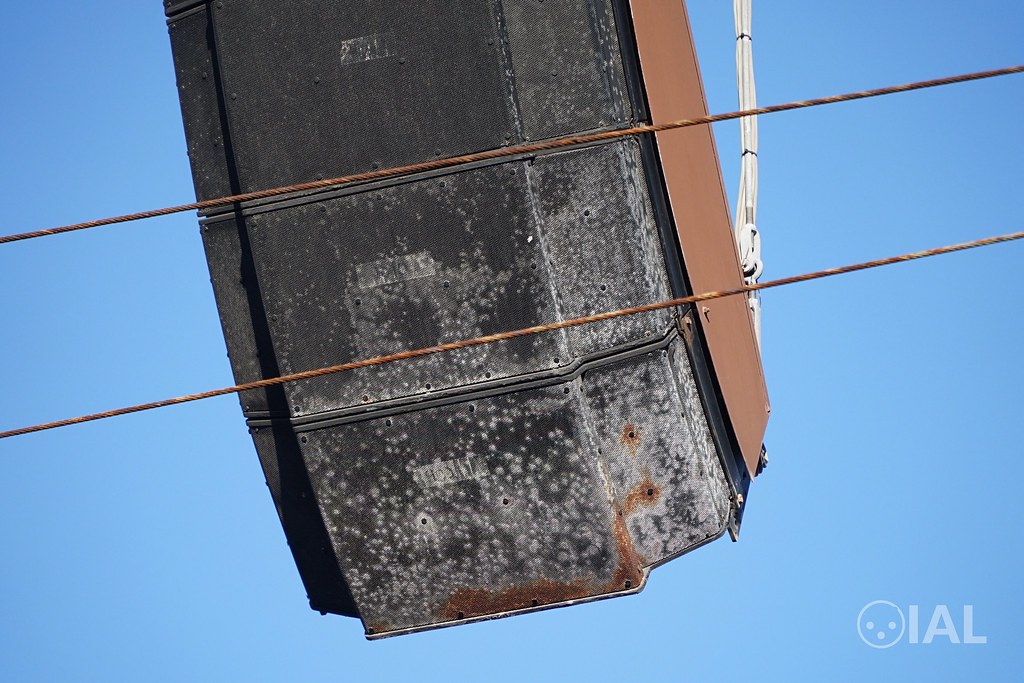 A close-up of a RoomMatch array and the effects of constant water exposure.

For low frequency support, Universal employed four rows of MB12 WRs arrayed underneath the bleachers, with six MB12s per row. Two rows flank the right and left side of each section, with all the subwoofers facing away from the arena in a special arrangement meant to contain low frequency content inside the theater. Taken as a group, 72 MB12s are installed in the arena – an astounding number.

So, how does it sound? Let me preface this by saying the following: if you’re looking for numbers and measurements, it might be best to drop off now. I don’t have access to that type of equipment, and even if I did, it wouldn’t be appropriate to bring it into a theme park. What follows is my own subjective impressions of the products at hand.

So with that disclaimer in mind, the Bose RoomMatch system actually doesn’t sound half-bad. In fact, unlike many Bose Professional products, the RoomMatch arrays sound surprisingly good. No, they don’t appear to be neutral like d&b audiotechnik or Meyer Sound, but I don’t think that’s their intended purpose. Instead, they sound like a nice HiFi stereo, with all the contours and DSP settings meant to make the sound – whatever the sound – pleasing to the listener’s ear. Highs are crisp, and – unlike a JBL VerTec system – relaxed, and the array appears to have enough low frequency support on its own to negate the need for separate subwoofers in some applications.

I think much of the RoomMatch sound can be owed to Bose’s use of compression drivers – a refreshing change from their insistence on using cone drivers for high frequency reproduction. It’s one thing if Bose were to produce a product similar to the Meyer Sound MM-4XP, but it’s another when a large number of their products use “twiddlers” and full-range drivers in their mid-sized products for high frequency support. The RoomMatch system is refreshing, simply because you can actually hear content above 12 kHz. 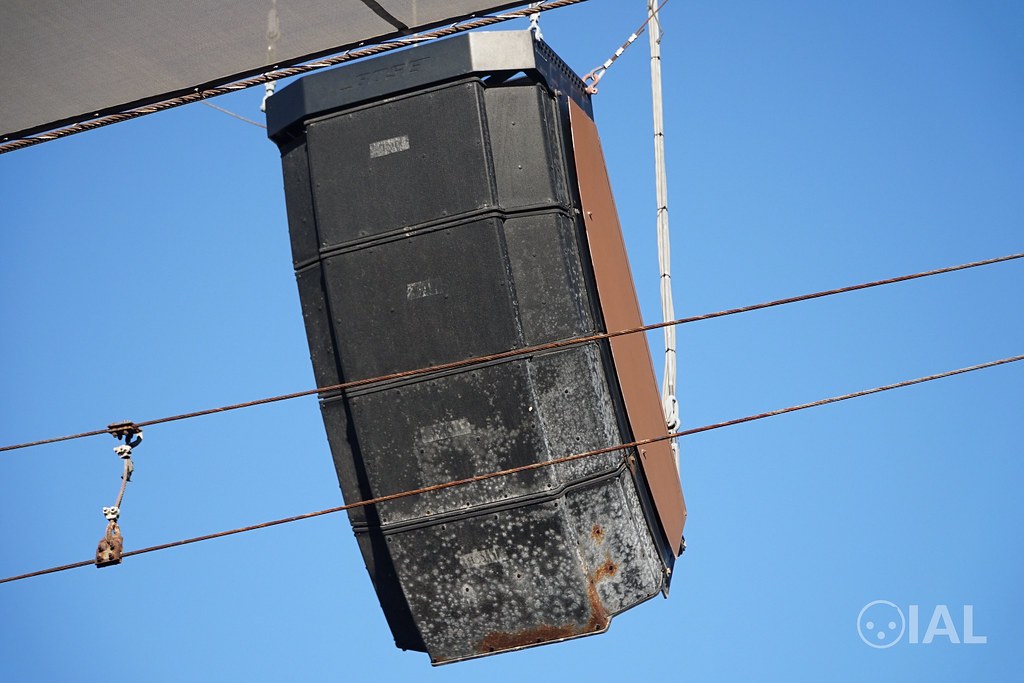 That being said, the RoomMatch modules don’t like being pushed, and the boxes quickly lose steam once you get them out of their comfort zone. There have been times when Universal has attempted to emphasize announcements before the show by increasing the system’s SPL, and boy, the RoomMatch arrays were not having it. I’ve admittedly never heard a RoomMatch system in a live environment, but I’m going to assume that it can’t compete with similarly equipped boxes such as the Meyer Sound MICA or the d&b audiotechnik V-Series in terms of output.

As for the Bose MB12 subwoofers, they seem to do their job. They’re not gut-wrenching loud like a d&b audiotechnik J-SUB, nor are they especially detailed like a Meyer Sound 900-LFC. Instead, they provide the necessary booms and bops that accompany the WaterWorld soundtrack. They don’t go very low, and coverage can be inconsistent depending on where you sit within the bleachers, but they seem to accomplish Universal’s biggest goal: keeping LF content inside the park and away from the surrounding neighborhoods. When you factor that in, I guess it’s mission accomplished.

In closing, the RoomMatch product sounds very good, and their emphasis on different horn dispersion angles appears to be a unique solution that seems especially useful in the installation market. I wonder how the product takes off, and I’m curious if RoomMatch can help clear some of the stigma associated with the Bose brand. On a second note, I also hope to see Bose slowly phase out their FreeSpace products in favor of the Bose RoomMatch Utility line of smaller point-source boxes. Just make the boxes weather resistant, and I think you’ll have a compelling product for foreground and background music reproduction. Bose evidently knows how to create a good-sounding compression driver, and I’d like to see them continue its use across their product line. As for the MB12, it’s not a favorite product of mine, but I understand why Universal elected to use arrayable MB12s over the larger RoomMatch subwoofers. But boy, if I could dream…

Anyway, thanks for reading, and be sure to drop a line if you have a correction or any additional information on the Bose RoomMatch array.