Fantasmic! is a nighttime spectacular that combines live actors, large-scale animatronics, fire, pyrotechnics, and water effects in a tightly-produced 22-minute show that performs nightly at Disneyland Park. The show takes place on the Rivers of America and transforms Tom Sawyer Island into a spectacular stage. A fan favorite, the show has been running regularly since 1992 with several modifications over the years.

However, in early 2016, Fantasmic! underwent a year-long hiatus as Disneyland prepares to welcome a new land based on the Star Wars franchise. While construction crews work on Disney’s latest addition, crews have also been working on refurbishing Fantasmic! – upgrading equipment, and performing maintenance on this much-beloved show.

With Fantasmic! returning to Disneyland this summer after a lengthy refurbishment, I thought we’d take a look at the show’s old audio system before its new system debuts in just a few months. Let’s get started.

First thing’s first, Fantasmic!’s audio can be divided into four segments: the island system, the tower delays, the lamppost fills, and the surround effects. Of course, given the sheer scale of the show, there are dozens – if not hundreds – of channels of audio being used during each performance, but let’s stick to these simplified divisions for the sake of this article.

Let’s start with the island system.

For mains, Fantasmic! relied on the J-Series from d&b audiotechnik, with Disney choosing to deploy four stacks of two J8s ground-stacked on top of two J-SUBs. 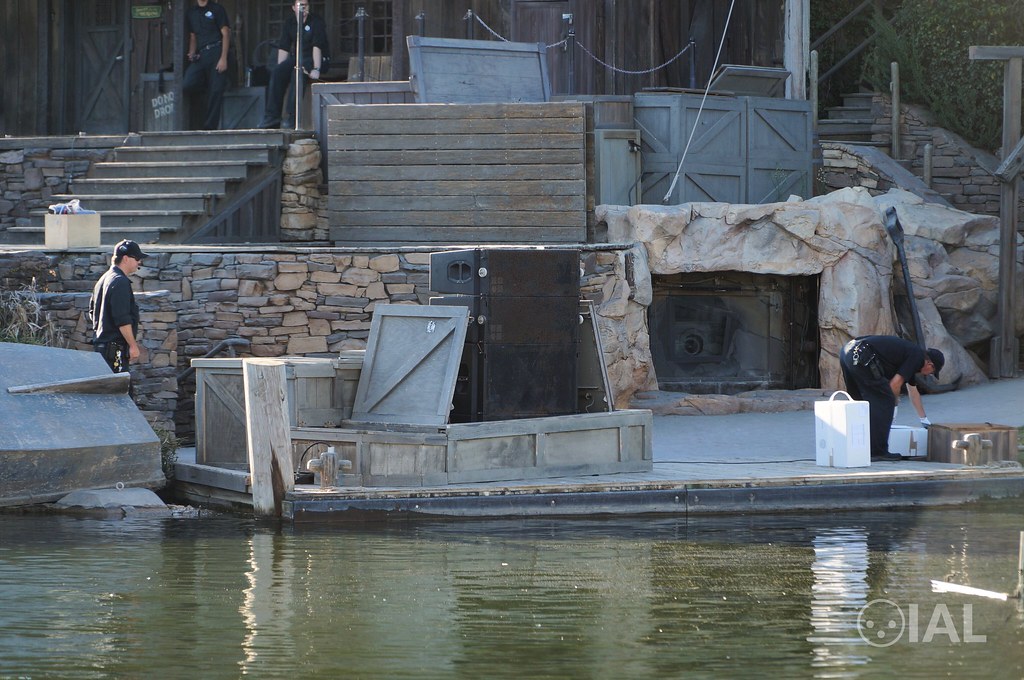 Two d&b audiotechnik J8s and J-SUBs rise from their hiding space in preparation for the show.

While not deployed as a traditional line array, the combination of two J8s and two J-SUBs appeared to satisfy three of Disney’s requirements: 1) to effectively reach audiences 70-100 feet away across a man-made river, and 2) to not intrude on the audience’s sight lines during the show. After all, we wouldn’t want two large towers obstructing Mickey Mouse from his adoring fans.

The third requirement? Disney needed a box that could withstand adverse environmental conditions without affecting audio quality. No, we’re not just referring to water. Instead, Fantasmic! involves the heavy use of fountains, mist screens, fire effects, and pyrotechnics, and the J stacks are – you guessed it! – situated right in the middle of the action. Not only are the boxes subjected to intense heat and debris from fireworks, but they’re also doused with gallons of water during each show – all courtesy of the surrounding fountains and mist screens. This is a challenging environment for any speaker, let alone a top-tier high-output system known for its pristine audio quality. Yet despite the environment and the limited number of boxes, the Js seemed to handle the abuse and output requirements rather well, with the system’s eight J8s and J-SUBs offering adequate coverage around the immediate viewing area. 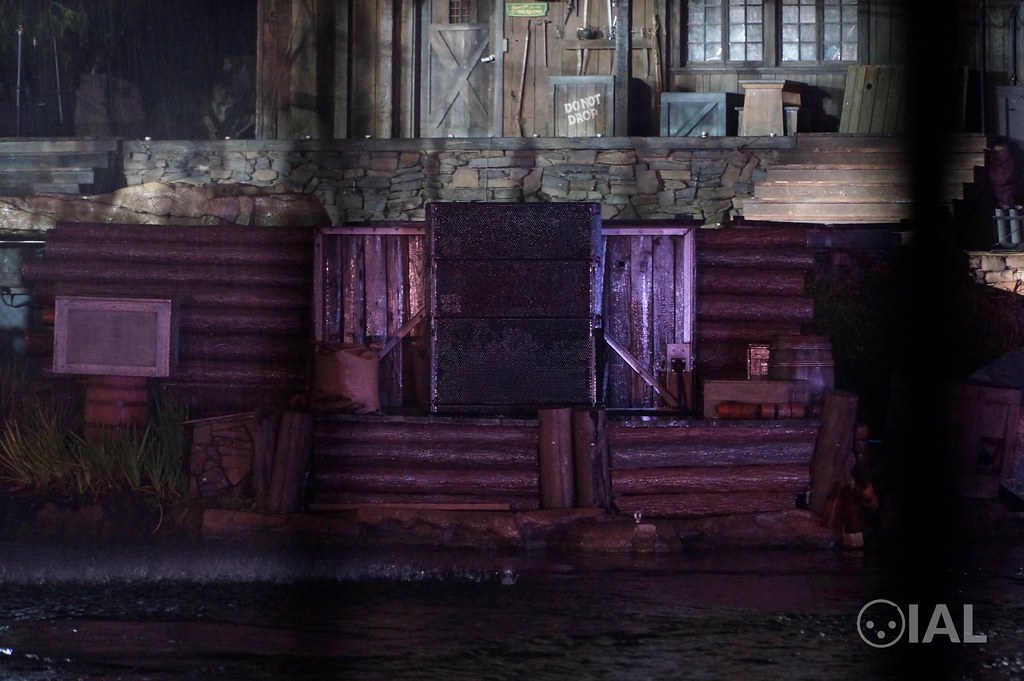 A very wet stack of two d&b audiotechnik J8s and J-SUBs in use during a show.

In fact, despite only facing two J8s and J-SUBs at a given time, sitting in front of the show would oftentimes result in a hair-raising experience induced by the remarkable output of the J-Series. Simply put, the show was very loud, and in-your-face, with an emphasis on the J8’s high frequency output to cut through the show’s three large mist screens. Sound adverse readers beware – Fantasmic was a very loud show! 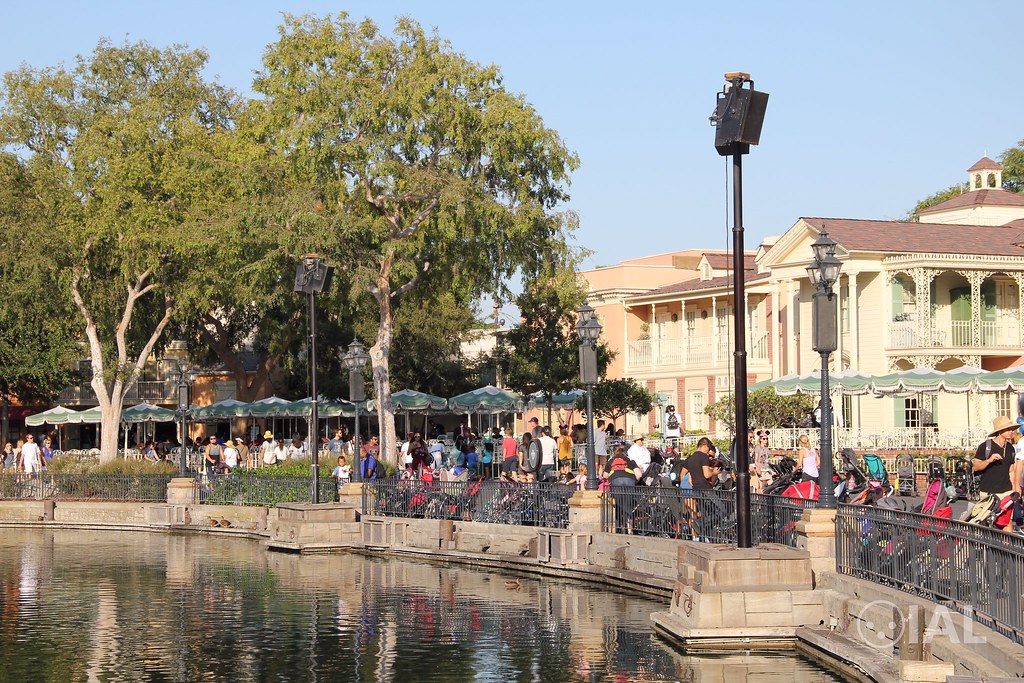 To extend the show’s coverage past the immediate viewing area, Disney called upon a distributed tower system composed of Meyer Sound UPA-1Cs and MSL-2As. The UPA-1Cs would be mounted on retractable towers that line the border of the viewing area, while the MSL-2As would be embedded in the show’s lighting towers (offering a bit more output to compensate for their elevated height). Because both d&b audiotechnik and Meyer Sound strive for neutrality above all else in their products, the Meyer Sound delays worked seamlessly with the island system without any noticeable changes in tonality. 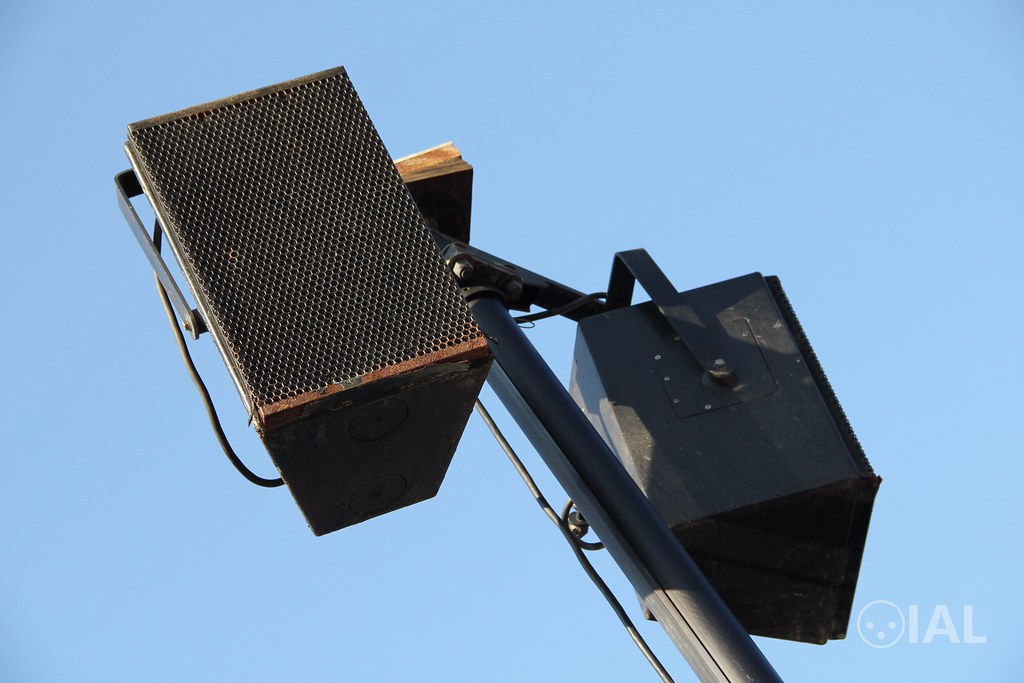 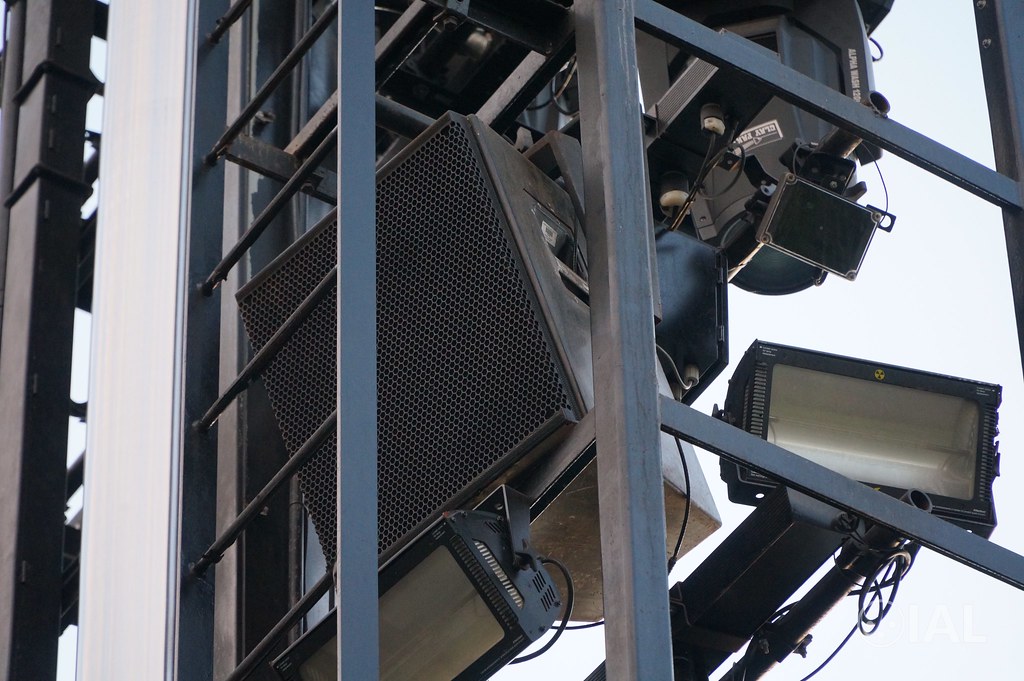 A Meyer Sound MSL-2A embedded on a retractable lighting tower.

Up until recently, the Meyer system was also one of the few last remaining pieces of equipment that debuted with the show back in 1992. When you do the math, these Meyer boxes served the show for 23 years – an astounding feat for any speaker, let alone one that’s also subjected to the show’s environmental conditions. In fact, some UPA-1Cs had unfortunately began to deteriorate towards the latter half of the show’s run – a symptom of the show’s wet conditions. 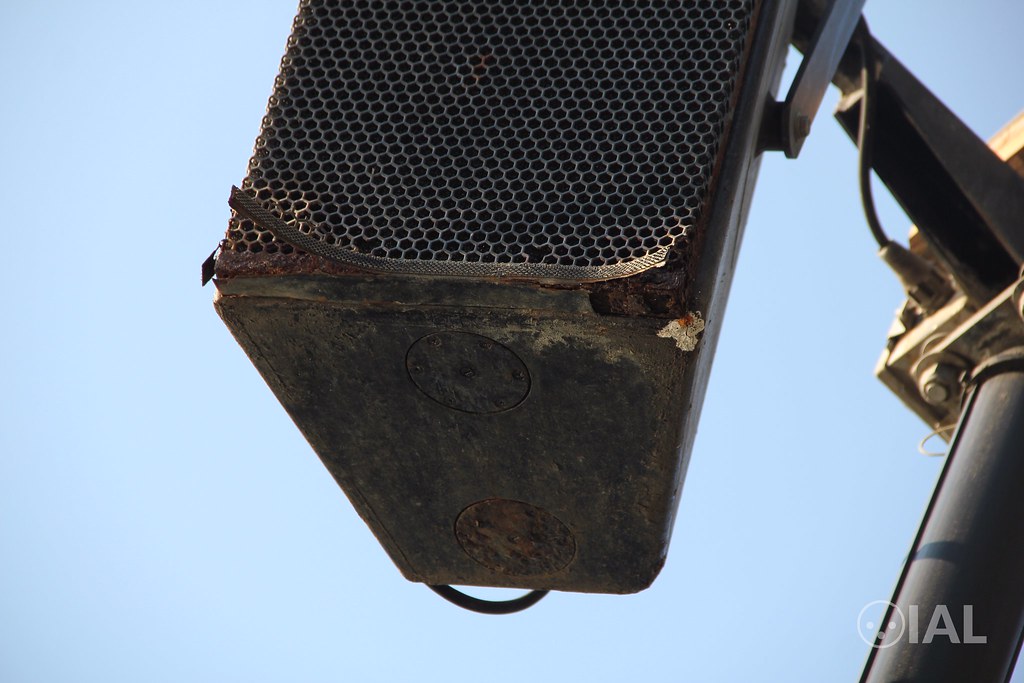 A sad looking Meyer Sound UPA-1C – note the effects of water on the cabinet and grille after 23 years of constant use.

However, regardless of their appearance, the UPA-1Cs and MSL-2As still managed to produce pristine audio throughout the show’s run. 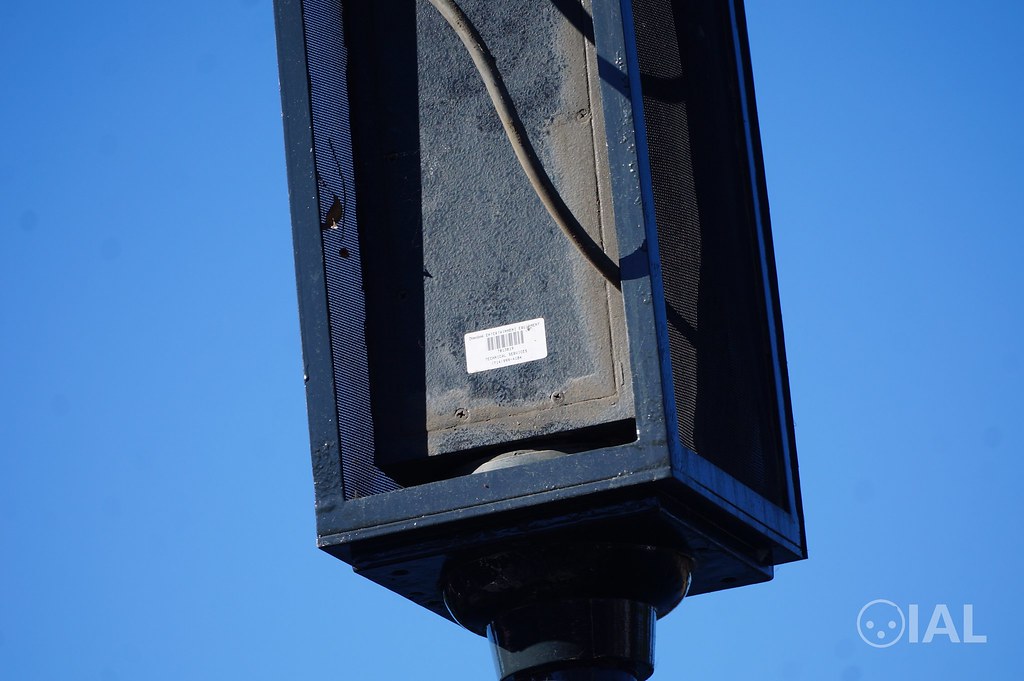 This unidentified speaker would provide fill and effects for the immediate viewing area.

To round off the main system, Disney also deployed a lamppost system featuring narrow boxes embedded underneath each lighting fixture. Now, these boxes would primarily serve as the land’s daytime background audio system, but they would also act as fills and effects boxes during each show. Considering their size, they would get quite loud and act as a suitable fill underneath the Meyer Sound towers.

With that in mind, I haven’t been able to narrow down a manufacturer for these speakers. Internet research suggests that these may be Meyer Sound UPMs, but their shape doesn’t seem to fit the UPM’s dimensions unless Disney managed to request a specialized box from Meyer. If you have any clue who made these boxes, please let me know.

Surrounding area speakers would also link to the show’s infrastructure to provide coverage when necessary, taking advantage of Disney’s holistic approach when it comes to integrating nighttime shows and experiences in existing themed areas. 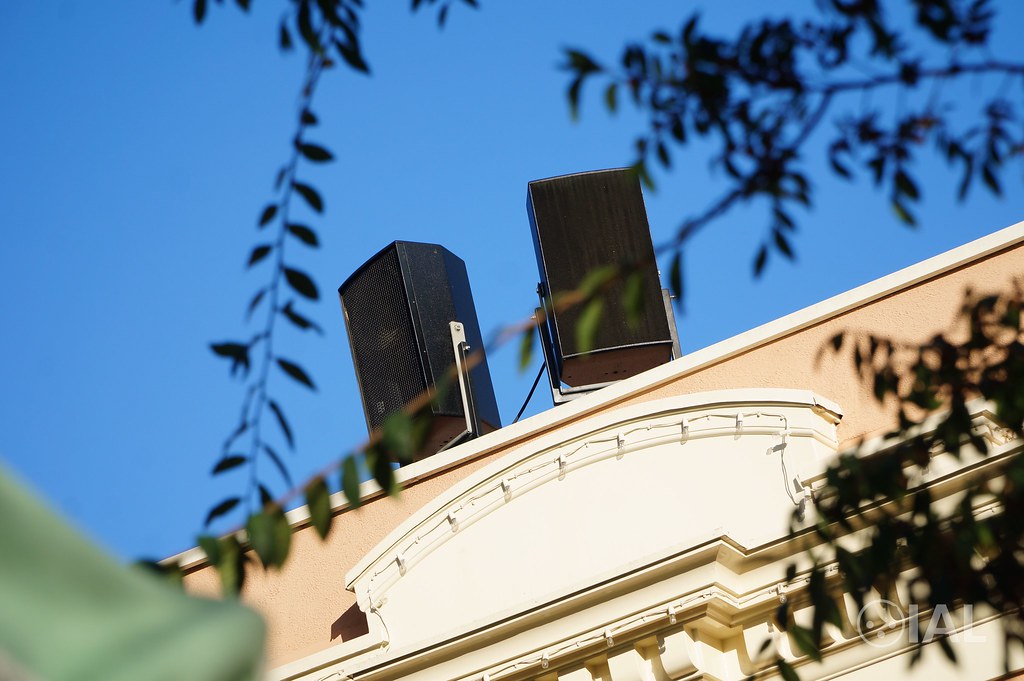 Peek-a-boo! Ci90s and Ci60s from d&b audiotechnik would rise before showtime to provide surround effects.

In all, Fantasmic! remains – in my view – one of the best audio experiences at any theme park in the world, with multiple top-tier manufacturers working in unison to provide an amazing nighttime experience. Kudos to the team that designed this specific system, and I can’t wait to see what Disney has in store when Fantasmic! returns in 2017. Thanks again for reading, and be sure to get in touch if you have a correction or additional information that may be relevant to this article.