Fantasmic! is a nighttime spectacular that combines live actors, large-scale animatronics, fire, pyrotechnics, and water effects in a tightly-produced 22-minute show that performs nightly (up to two shows per night) at Disneyland Park. The show takes place on the Rivers of America and transforms Tom Sawyer Island into a spectacular stage. However, unlike World of Color which debuted in 2010, Fantasmic! has been running regularly since 1992, undergoing numerous upgrades and changes over the years as technology improves.

However, in early 2016, the show underwent a year-long hiatus as Disneyland prepares to welcome a new land based on the Star Wars franchise. While construction crews work on Disney’s latest addition, crews have also been working on refurbishing Fantasmic! – upgrading equipment, and performing maintenance on this much-beloved show. Judging from the equipment already installed on the main show towers, it also appears that the show itself will receive new or modified scenes, but that won’t be the focus of this article…

…instead, let’s take a look at some of the audio and lighting upgrades that have been spotted at Fantasmic! thus far.

Like World of Color, Fantasmic! employs the use of show towers that hide underground throughout the day. These towers are massive, and are only erected several hours before showtime, ensuring clean sight-lines during the day. While the show has undergone several changes over the years, Fantasmic’s last lighting setup featured an array of Clay Paky Alpha Wash 1200s and Alpha Profile 1200s alongside Syncrolite MX4s. Followspots were also employed on the top of select towers to help highlight certain characters, and Atomic 3000 DMX strobe lights from Martin were also used for show effects.

With the revised tower, Robe BMFLs have replaced the Clay Paky fixtures and followspots on top of the towers. Given the lack of a space for an operator, there’s a good chance the show will utilize BlackTrax tracking software and the top-level BMFLs to replace the manual followspot operators – much in the same vain as Frozen – Live at the Hyperion at Disney California Adventure. Projectors have also been spotted on top of the tower that will be utilized for new projection mapping effects, and the Martin strobe lights have been replaced by Robe Strobes. 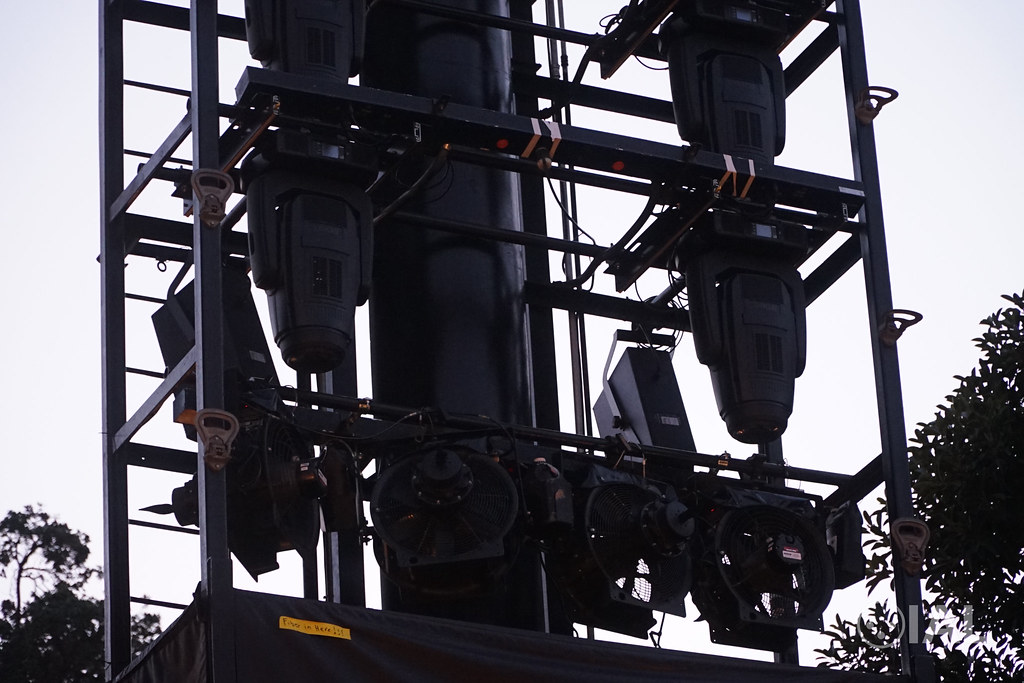 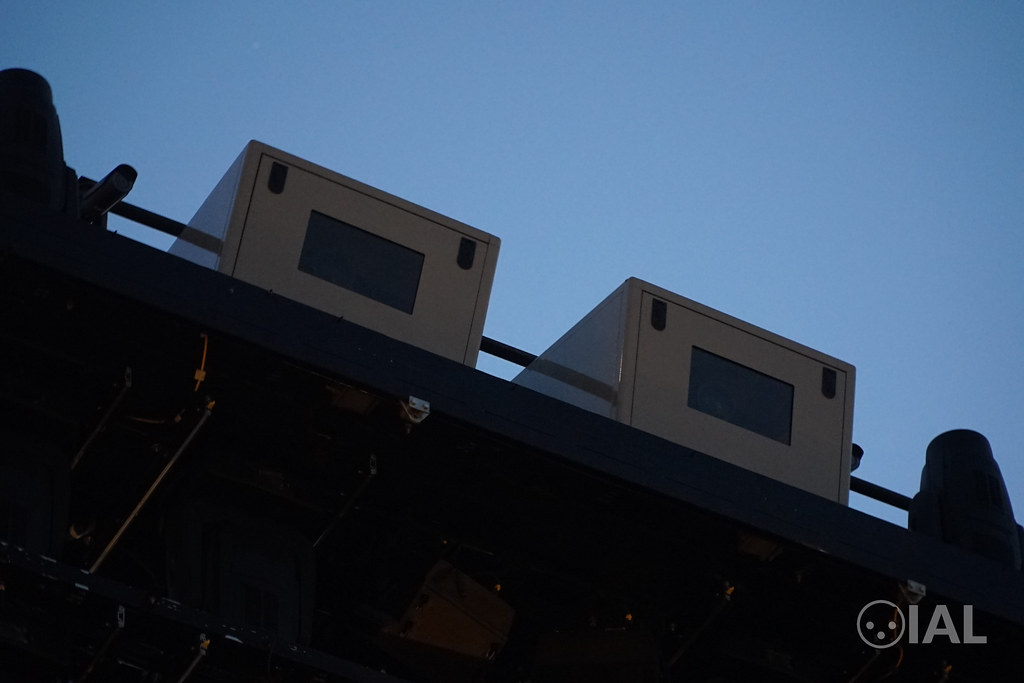 New projectors also flank the top of the modified towers. 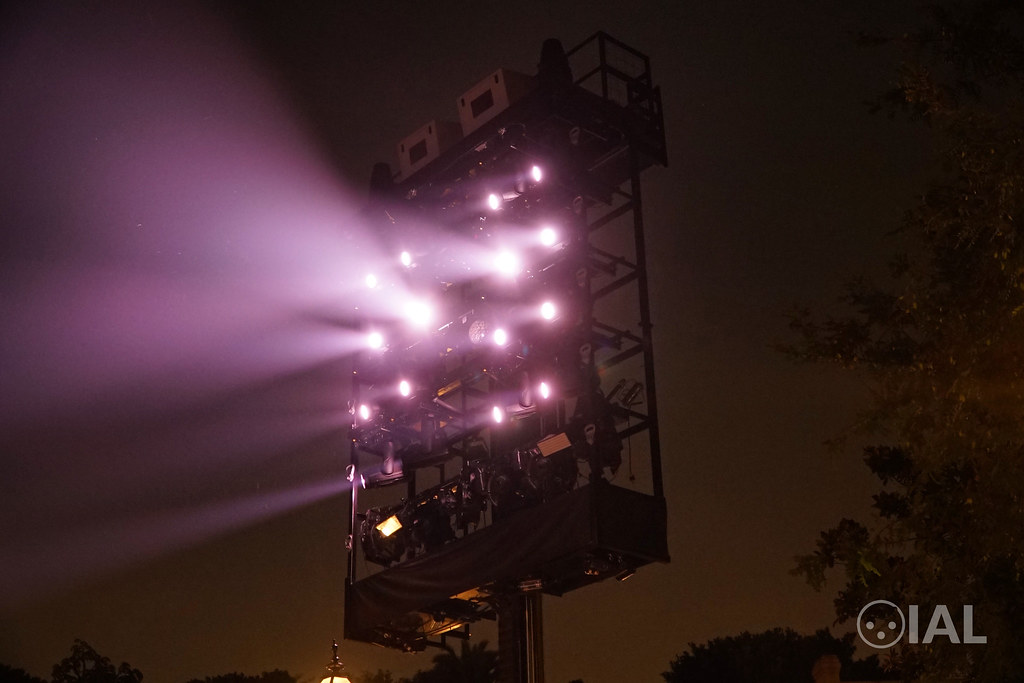 The new show towers in action during Disneyland’s weekend entertainment offerings at the Rivers of America. 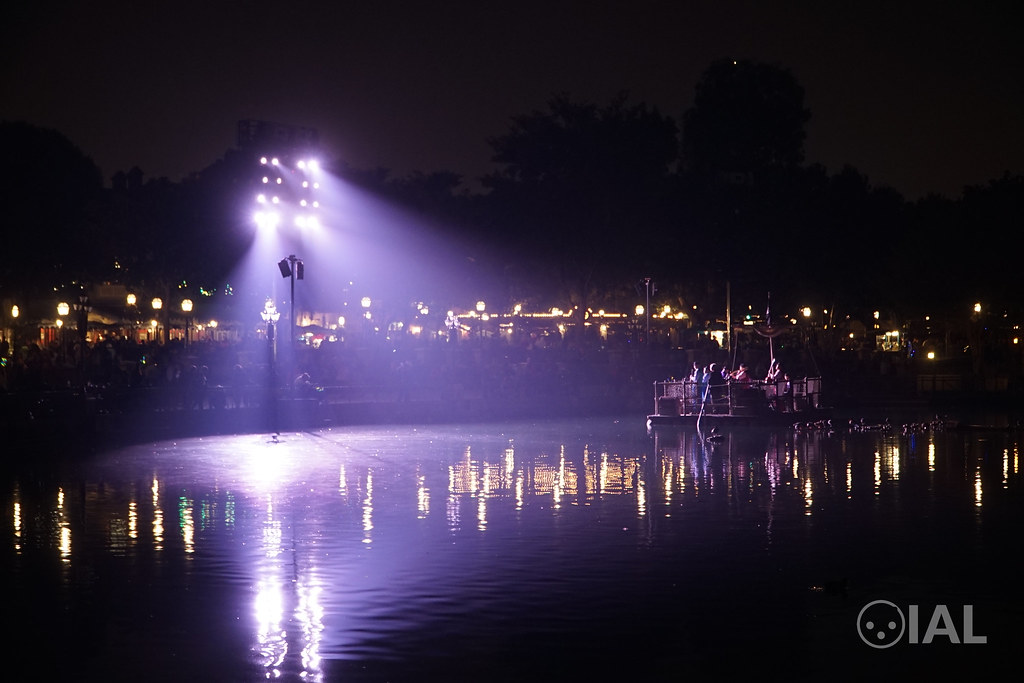 These Robe fixtures are bright!

Audio in Fantasmic! plays a vital role in the show, as with all major productions at the Disneyland Resort. Previously, the show deployed four stacks of d&b audiotechnik loudspeakers stationed on Tom Sawyer Island, with two J-SUBs and two J8s dedicated per section. Despite the relatively small number of boxes for the primary island system, the show remained incredibly loud, linear, and clear – with a slight high frequency boost to help the arrays cut through the water screens. While not all-weather enclosures, the d&b audiotechnik J stacks are subjected to extreme moisture, pyrotechnics and fire effects. We haven’t seen what the new iteration of Fantasmic! will bring for the island system, but I have heard word that the main system remains the same – with new boxes of course.

To help support the island system, Meyer Sound UPA-1Cs and MSL-2As were deployed around the outer perimeter as delays. Since both d&b audiotechnik and Meyer Sound strive for neutrality above all else, this combination worked well and helped fill in any potential deadspots that the main d&b audiotechnik J arrays could not cover.

However, after 24 years of service, the Meyer Sound boxes have been replaced with d&b audiotechnik Yi7P boxes. Since Meyer Sound no longer produces passive loudspeakers, this new setup presumably allowed Disney to retain the same cable infrastructure in the show without running power to the UPA-1C’s newer counterpart, the UPA-1P.

In addition, the lamppost loudspeakers (which, I assume, were either EAW or Meyer Sound? – anyone know?) have been replaced by two d&b audiotechnik E6s. 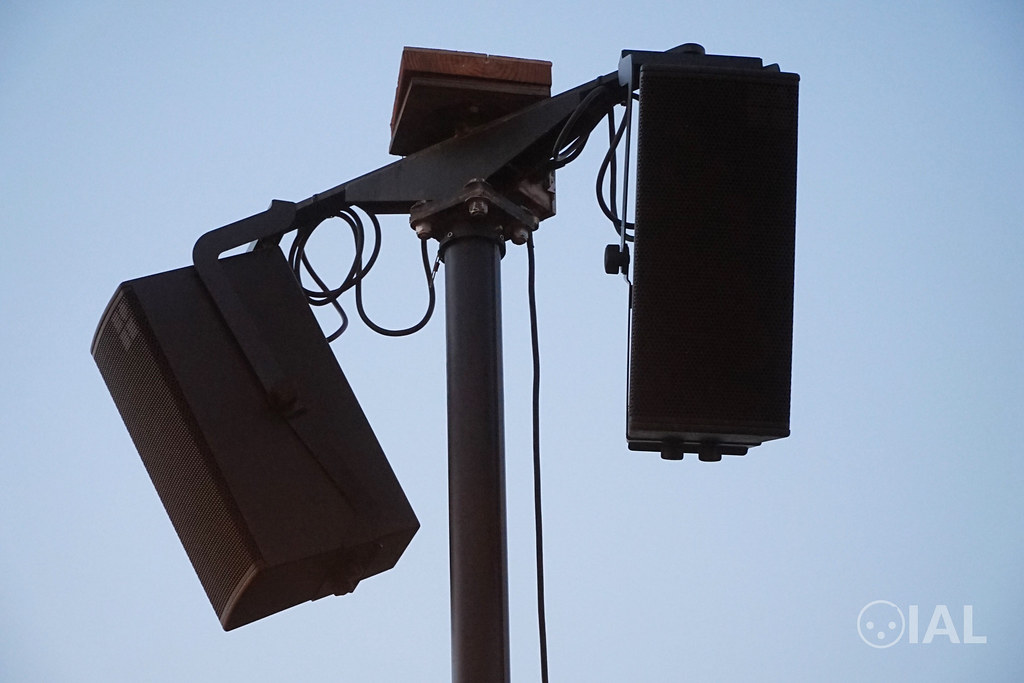 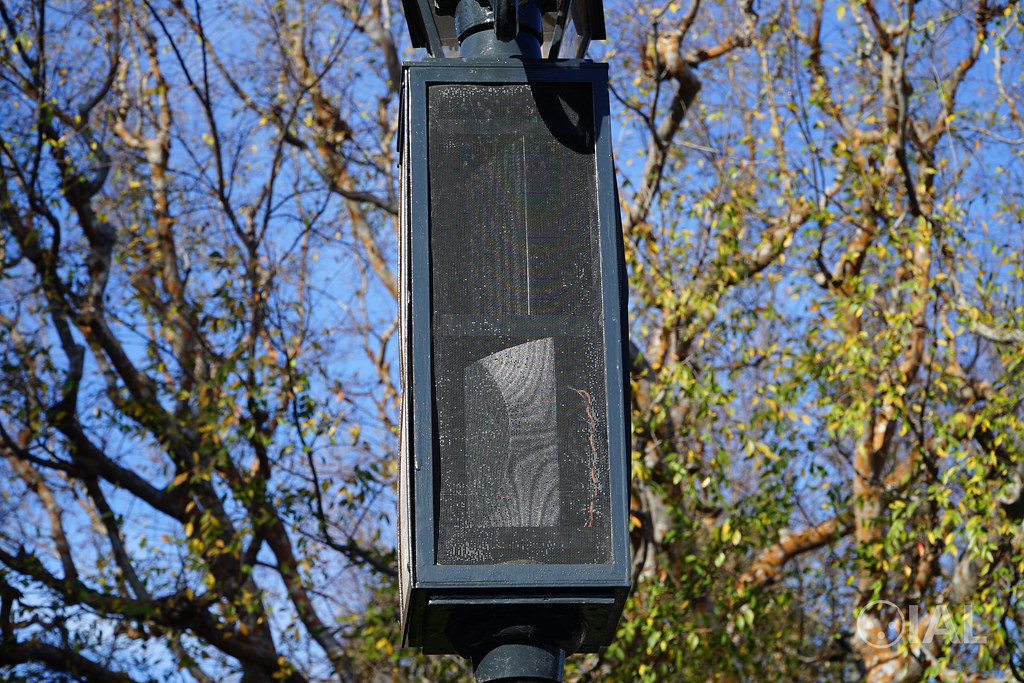 Despite what’s been revealed so far, there’s still much more lurking underground and behind-the-scenes. Fantasmic! is expected to reopen later this year, and I’ll be watching to see how these new upgrades are implemented. If Disney’s latest productions are any indication, I think we’re in for a real treat.