World of Color at Disney California Adventure is a nighttime spectacular that combines fountains, mist screens, sound, visuals and lighting into an immersive experience. The show takes place nightly at Paradise Bay, and practically all of the show equipment – fountains, lighting, and audio – remain hidden during the day to maintain the park’s themed atmosphere. However, during the early evening, show towers begin to rise as crews work to prepare the show for its nightly performances.

While guests can watch the show from the outer perimeter of the lagoon, the principle viewing area takes place directly in front of the show’s massive platform, which hosts fountains, fire effects, projectors, and mist screens. Beyond this platform are six lighthouses which each carry lighting and projects (and sometimes audio and lasers) to complete the main stage – all focused towards the viewing area. This viewing area – which is divided into different colors – is served by five show towers equipped with audio, lighting, and even bubble machines for extra bubble fun. 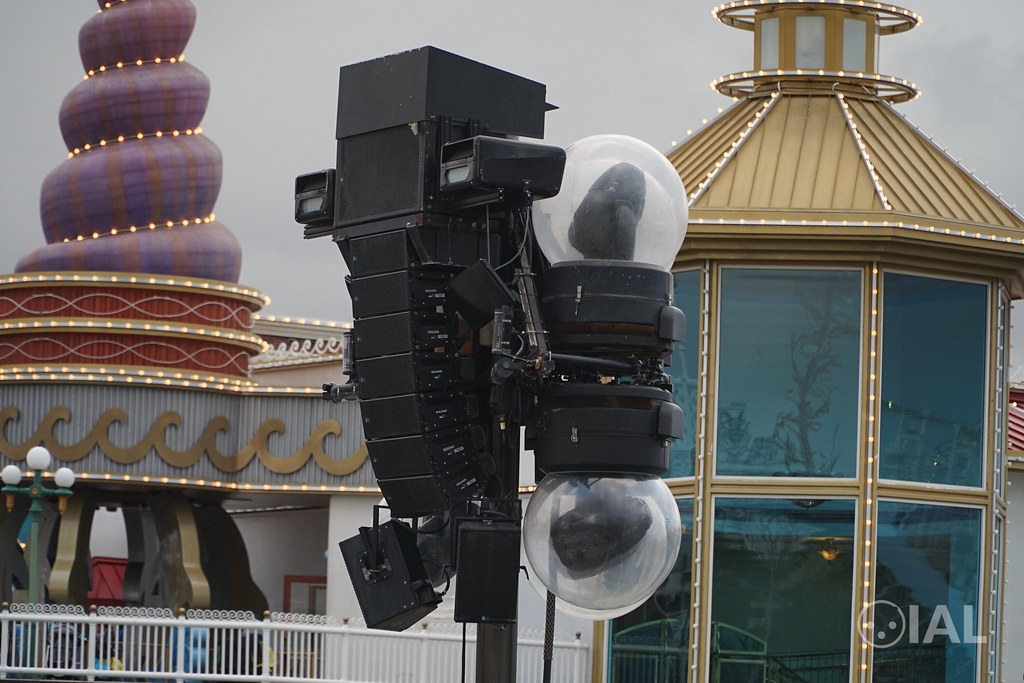 Today, I’d like to profile a single World of Color show tower which I’ve posted a photo of above. These towers – which I believe are raised using compressed air – feature two primary elements: audio and lighting. 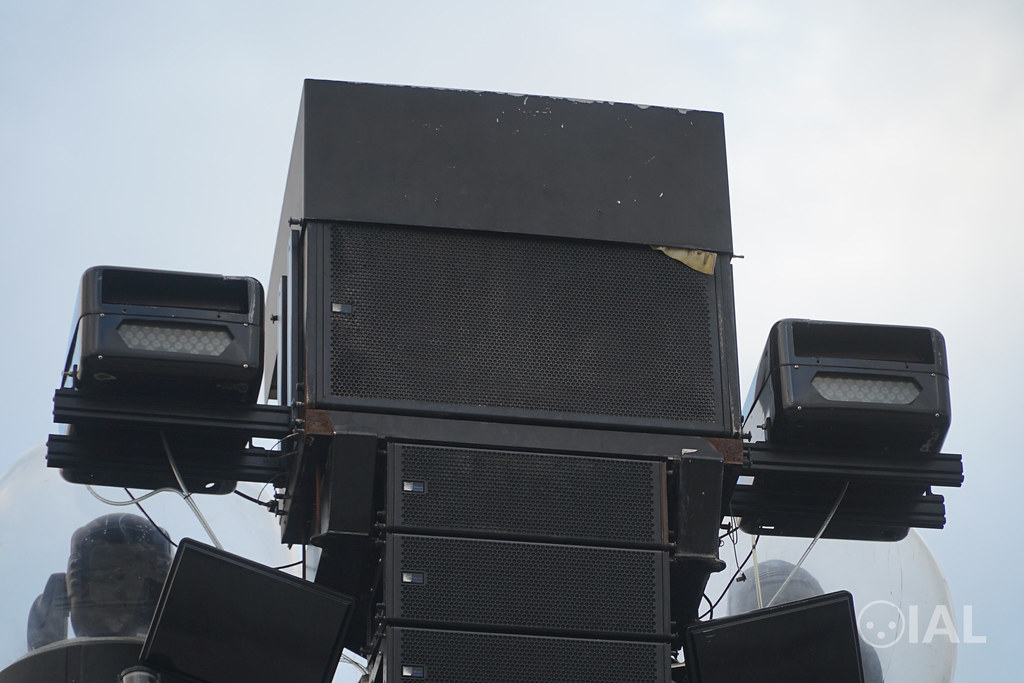 A Meyer Sound 600-HP subwoofer with a computer module located on top, with two bubble machines flanking the side. 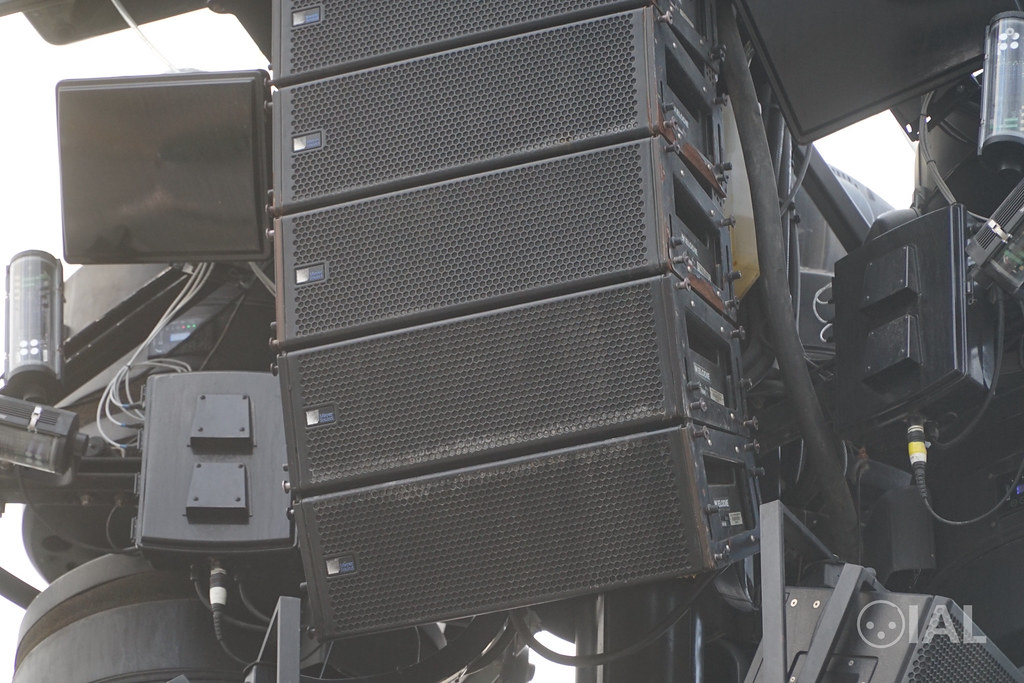 A close-up of a Meyer Sound M’elodie line array element. 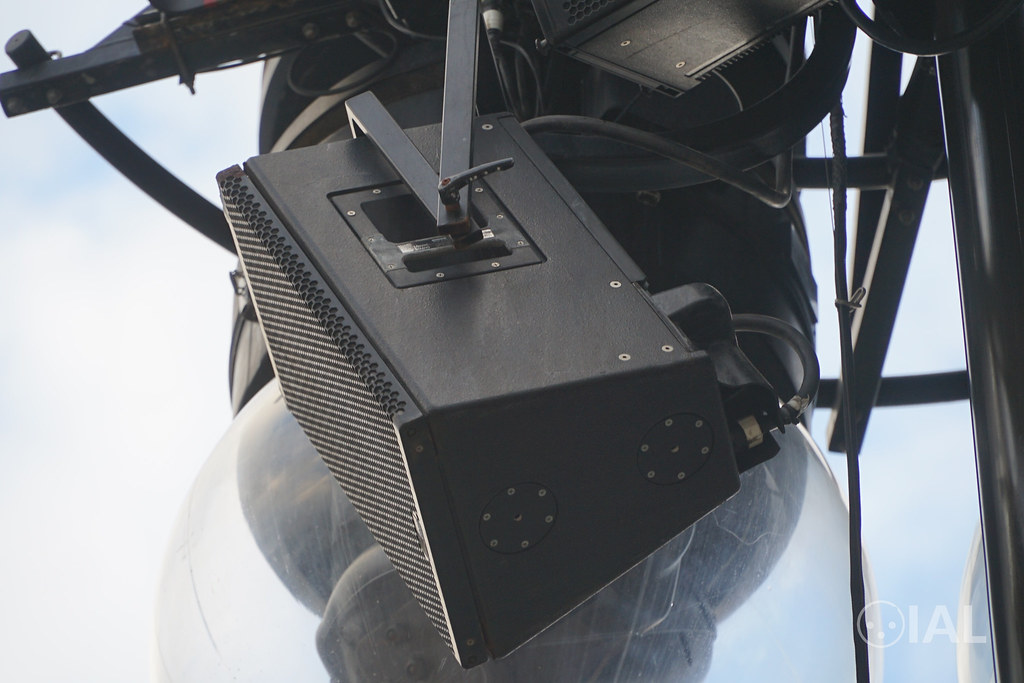 A close-up of a Meyer Sound UPA-1P – note the rain hood and the all-in-one VEAM connector.

Because of the complications associated with running massive runs of copper underground, Disney elected to use self-powered Meyer Sound speakers on top of these retractable poles. This allows the company to send a digital lead to every tower, allowing some of the processing to take place on the pole itself rather than in an off-site location. This trend isn’t new – Tokyo DisneySea’s massive lagoon system also uses Meyer Sound self-powered boxes to cut down on massive cable runs around the show area. While each tower can vary slightly in configuration, this specific tower features a single Meyer Sound 600-HP subwoofer, six M’elodie line array elements and two UPA-1Ps for side fill coverage. All of the Meyer Sound boxes are outfitted with rain hoods to protect the amplifiers and connections from moisture, alongside VEAM all-in-one connectors which feature signal, power and Meyer Sound’s RMS monitoring service in a single weather-sealed connector. On top of the 600-HP is a computer designed to handle some of the tower’s processing, and to the sides are two bubble machines that activate periodically during the show.

In terms of lighting, this tower also features six Vari-Lite VL3000 moving heads housed in Tempest enclosures designed to shield the fixtures from the elements. These fixtures are designed to enhance the show with effects, but they also periodically face the audience to add some extra ambiance to the viewing area. There are also several sensors installed that link up Made with Magic accessories, which feature LEDs that sync up with the show. It’s a striking visual if you’re able to get enough guests with the Made with Magic gear gathered up in a single location. 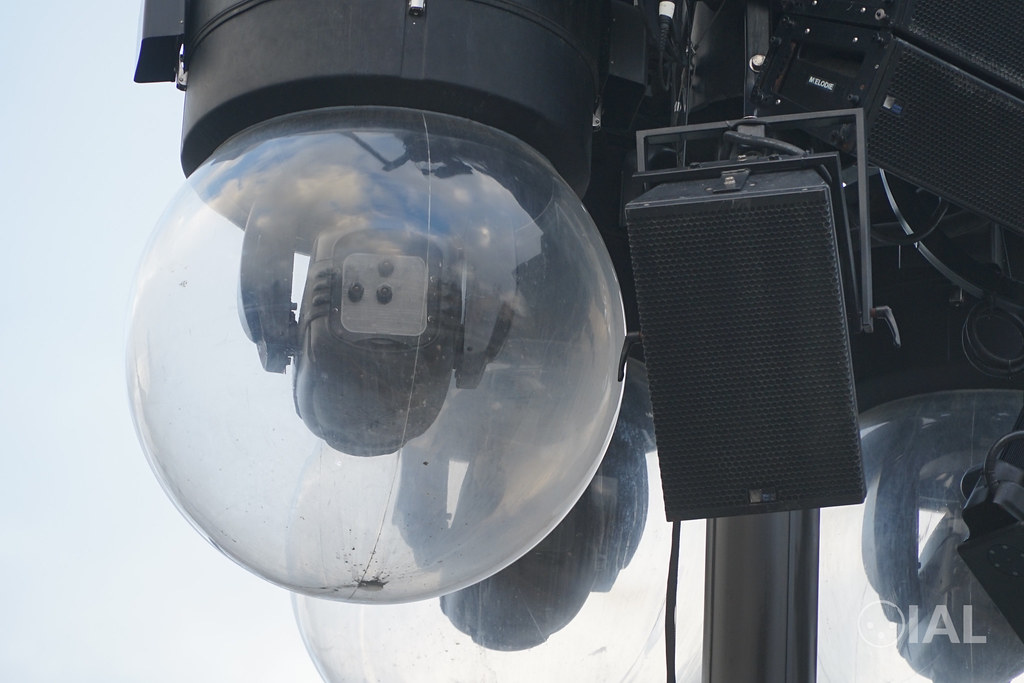 A Vari-Lite VL3000 inside a Tempest enclosure next to a UPA-1P.

During the show, these towers are usually engulfed by water and mist, and pummeled with moderate winds due to the power of the fountains and mist screens. Add to the fact that there’s a lot of moisture – not just water droplets – floating in the area, and you have an incredibly challenging environment for gear to operate in. However, despite the challenging conditions, the audio and lighting all seem to hold up incredibly well based on the accounts I’ve heard.